Dell Inc. is an American multinational computer technology company that develops computers and related products and services. Dell is pairing technology with innovation to make a positive social and environmental impact – building a Legacy of Good. They were looking to invest in clean green energy in their Indian facilities, and partnered with Tata Power Solar to integrate solar power in their energy mix.

Dell is green conscious company, trying to generate green power wherever possible, thereby reducing the load on the environment. At their facility in Bengaluru, they already have a rooftop solar power plant installed.

Dell had two objectives when they were looking at green energy, namely – power the office premises with renewable energy and reduce the usage of energy for cooling the building during summers.

Tata Power Solar offered to commission a vertical solar system, which would produce the essential clean and green energy to power their office and also cut-off direct sunlight from hitting the building, thus keeping it cool during summers.

This is the 1st time in India that a vertical solar installation has happened on an existing building. 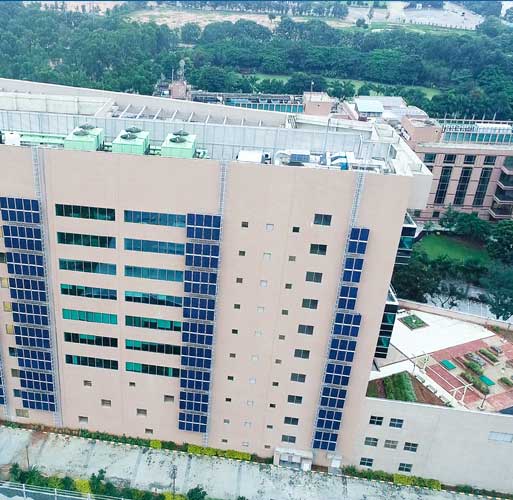 With first of its kind installation at hand, the engineering team at Tata Power Solar designed a custom structure with vertical load bearing capacities after a detailed research & development. The structure design had to cater to the load bearding capacity of the wall, since it mounted on an existing building.

Provisioning for higher energy generation along with long term operation & maintenance, the structures have been designed to have 30' tilt. 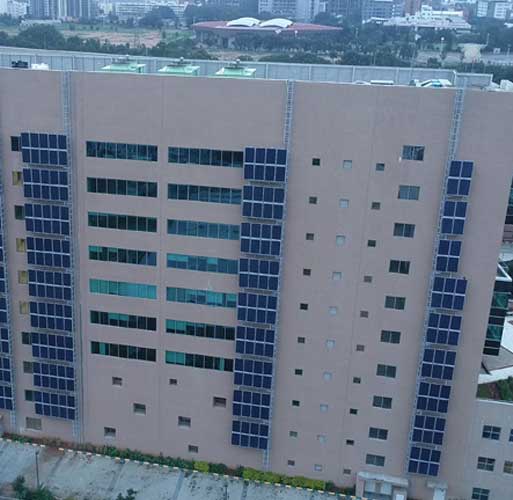 Since the installation was at a height, it was of primary importance to us that the project is commissioned with utmost safety standards in place, ensuring zero safety incidents.

Platform and walkways have been inbuilt into the structure for secured accessibility and ease of maintenance.